Paris 2015 needs to be part of a much a wider narrative that joins the dots between climate change and people’s lives. By expanding the ‘social reality’ of climate change, bringing the centre-right in from the cold, and developing a story about climate impacts that is consistent and coherent, the conversation about tackling climate change can be an inclusive and powerful one.

A quarter of a century has passed since climate change entered the global policy arena, following the NASA scientist James Hansen’s now infamous testimony to the US Senate in 1988 that the world was rapidly warming. Since then, levels of carbon dioxide in the atmosphere have rocketed, and global temperatures have continued to rise. In the UK, political and public interest in climate change has inevitably ebbed and flowed. Public concern has been buffeted by the global economic recession, undermined by the climate ‘denial’ lobby, and punctured by moments of clarity, as the extreme weather predicted by scientists (such as more intense coastal and river flooding) begins to manifest.

For campaigners and politicians, the ‘road to Paris’ stretches clearly ahead, a crucial checkpoint on an even longer journey that ultimately needs to end in a global cap on greenhouse gas emissions (or, even better, on the extraction of fossil fuels in the first place). But are the UN negotiations at the end of 2015 on the public’s radar?

On the one hand, the answer is a resounding ‘no’. Outside of the bubble of policy wonks and activists, few have the ‘road to Paris’ as their blueprint for the year ahead. Climate change has a faint and fragile cultural footprint: unless you look closely, it is not easy to see it reflected in people’s daily lives. Floods and droughts may temporarily focus our minds, but for the most part, climate change is ‘psychologically distant’. And this psychological distance permits even those who grasp the scale of the challenge on an intellectual level to disengage emotionally, and quietly avert their gaze.

In the theatre of public discourse, climate change is typically offered no more than fleeting, cameo appearances– and there is even an argument that the Paris talks could be counter-productive for public engagement. After being billed as the last chance to ‘save the world’, the anti-climax of the last major UN climate negotiations in Copenhagen, 2009, preceded a rapid decline in media coverage and political salience.

But while climate change is never likely to compete with more immediate, visceral and tangible policy issues like terrorism, immigration or unemployment, there are signs that the debate is shifting once again. What is crucial in the run-up to Paris 2015 is that politicians, campaigners and community activists from across the breadth of society take a broader, more connected approach to public engagement.

Because while political gatherings may briefly pique the public interest, what will sustain it is a programme of public engagement that builds a popular environmentalism, and positions climate change in its rightful place at the heart of public and political discussions about what we want the future to look like. Achieving this means at least three things. 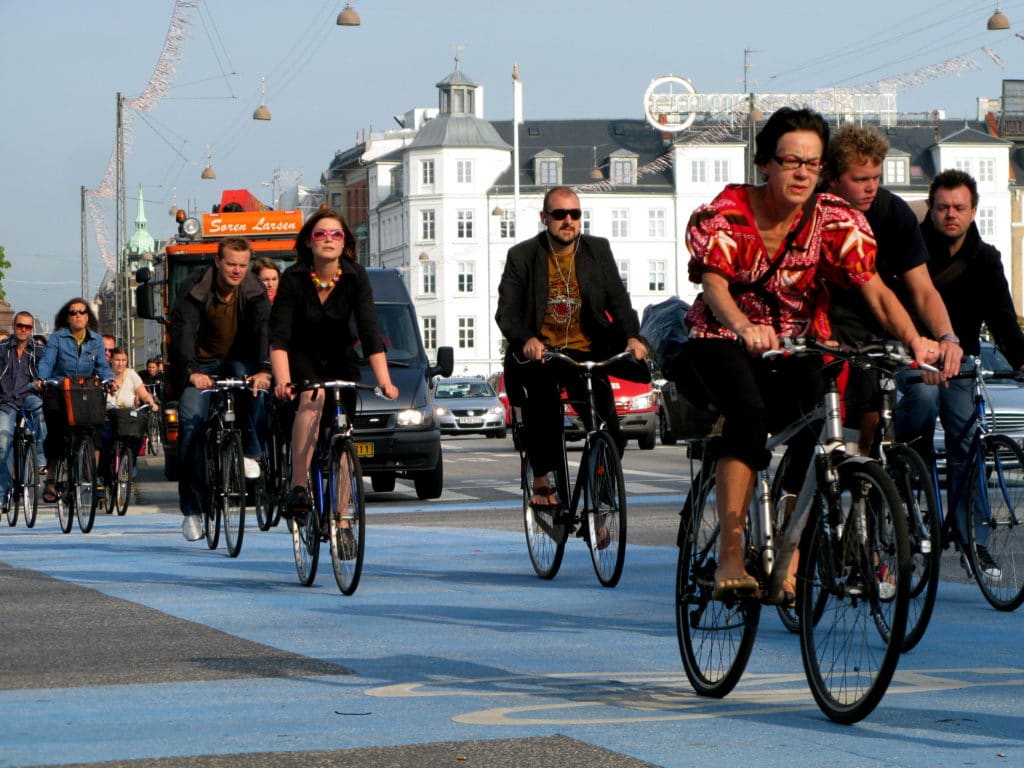 Firstly, it means thinking creatively about how to move climate change from a scientific to a ‘social’ fact – and how to mobilise our collective cultural imagination. Climate Outreach are currently collaborating with the Royal Society of Arts (RSA) on a series of events and publications which try to push the boundaries of what climate change means, and catalyse new conversations that don’t just involve the usual suspects. Climate change has been trapped in a box marked ‘environmentalism’, which has stifled our societal response to it. While the environment is clearly a crucial concern, climate change is relevant to every aspect of our lives – and it urgently needs to break out of the ‘green ghetto’.

Our collaboration with the RSA is called the ‘Seven Dimensions of Climate Change’ because thinking about climate change through the lens of seven different perspectives – science, culture, law, behaviour, democracy, technology and economics – is crucial if we are to mobilise a societal response that is proportionate to the scale of the challenge. Our first event involved leading comedians trying out ‘climate comedy’. Maybe laughing about something as serious as climate change is just another form of denial – but perhaps humour could activate our cultural antennae in a way that graphs, infographics and images of melting ice could never do. The science-communicators certainly don’t seem to be making much progress with the public – so maybe it’s time to let the comedians have a turn.

Secondly, it is crucial to build a rich and positive sense of identity and ownership around climate change that stretches across the political spectrum. This means faith groups, young people, black and minority ethnic communities, sports teams and everyone else in between. But it is no secret that scepticism about climate change is pre-dominantly associated with the right of politics. Research consistently shows that people reject the conclusions of climate change science because it threatens their political views. Someone who believes in the shrinking of the state and the autonomy of the market is unlikely to take kindly to climate policies which prescribe greater regulation of polluting industries and the government ‘meddling’ with consumer energy behaviour. But while the right may never learn to love these ideas, they are not the only climate policies in town. Although it may seem counter-intuitive, it is in the interest of people across the political spectrum that the centre-right has a strong voice on climate change. It is far better that the debate centres on what to do about climate change, not whether it exists.

Climate Outreach’s research has identified a number of narratives about climate change that are more likely to engage centre-right voters – from protecting our ‘green and pleasant land’ from the impacts of climate change, to building a ‘safe and secure’ climate for jobs, investment and community well-being. But it is crucial that these ideas are promoted by figures on the centre-right – not dictated by green campaigners and left-wing activists.

Thirdly, we need to develop a clear and coherent narrative about climate impacts and extreme weather in the UK. Recent survey findings from Cardiff University showed a clear positive connection between the 2013/14 winter floods and public concern about climate change. Flooded residents were twice as likely to identify climate change as one of the three most serious issues facing the country. Two thirds of respondents thought the floods were a sign that the impacts of climate change were already beginning to be felt, while an even clearer majority (72 per cent) agreed that the floods were a sign of what we should expect in the future from climate change. These findings provide important clues for campaigners, because they show that there is a widespread social consensus around the risks of increased flooding from climate change. (See here for our own recent research on how to engage UK residents around flood risk.)

Scientists will never be able to tell us whether a particular weather event was conclusively ‘caused by’ climate change – the probabilistic link between weather and climate makes these sort of simple statements impossible.

But we don’t necessarily need to have the ‘is this climate change’ conversation every time a flood submerges a village, or a period of drought damages crops. We know enough to say that the chance of these sorts of events occurring will increase as the earth warms up. And in the same way that politicians and campaigners routinely point to public opinion when justifying a crime or immigration policy, appealing to popular opinion on the need to take climate impacts more seriously may be an effective supplementary approach.

In some ways, it is not the ‘climate impacts’ themselves but their implications that are important for developing meaningful public narratives. When climate change is present in the stories that people use to discuss their lives, and what they expect from the future, individual climate impacts will more easily slot into them. A volatile climate means a vulnerable tourism industry. Unpredictable seasons produce unreliable harvests. Travel and food (to pick just two examples) are much easier starting points for a conversation about climate change than computer models or probability statements.

And in the same way, Paris 2015 needs to be part of a much wider narrative that joins the dots between climate change and people’s lives. The lesson that campaigners cruelly learned after Copenhagen was that positioning the 2009 negotiations as the ‘last chance’ made it difficult to maintain momentum after the conference came and went, with no legally binding treaty to show for it. The road to Paris will not in fact end there – and campaigners must be careful not to suggest that it will.

Polls consistently show that a majority of the UK public supports the government signing an international agreement to tackle climate change: government action is always more popular than changes to individual’s lifestyles.

Despite this, Nick Pidgeon, Professor of Environmental Psychology at Cardiff University, has documented the ‘governance trap’ of climate change, whereby voters expect the government to lead, and the government think climate change is a vote loser. The only way to overcome this double bind is for campaigners from across the political spectrum to mobilise voters to show their support for an international agreement. Bringing climate change into the mainstream is crucial for achieving this: by expanding the ‘social reality’ of climate change, bringing the centre-right in from the cold, and developing a story about climate impacts that is consistent and coherent, the conversation about tackling climate change can be an inclusive and powerful one.

If, as Naomi Klein argued in her recent climate change call-to-arms, we must ‘change everything’, then it follows that we ‘need everyone’ to make this happen.

This post originally appeared in Bringing it Home, a report from the Fabian Society.  The original chapter is titled “This Needs Everyone”.

We recently researched the UK public’s opinions on Paris COP21 and are hosting an event on November 12th at UCL to present our findings.