We focus on work that has impact – climate change is too important and urgent an issue to do anything else. We’re proud of the difference we’ve already made and continue to make in engaging the public with climate change to create a social mandate for climate action.

Here are some highlights of what we’ve achieved, working with communities and partners from across society and around the world, with the support of our funders and donors. To find out even more about the difference we’re making, have a look at our 2021 brochure, our 2020/2021 Annual review and financial statements and our 2019 Annual review.

Climate Outreach’s vision and approach bring about change that most people would have considered impossible. Their research leads the way in engaging people from across society on climate change, with impressive success. Their impact is wide reaching, working alongside key stakeholders and championing voices across the world."

This global media outlet – and a key agenda setter on how climate change is reported – invited our Climate Visuals team to run a workshop on effective climate photography for twenty members of their team. The Guardian is now adapting their climate imagery in line with our insights, as highlighted in this editorial, to show what climate change really looks like. They are moving away from images such as families enjoying heatwaves at the beach and images of polar bears to images of people around the world affected by – and finding solutions to – climate change.

The research that Climate Visuals has undertaken really helped to inform us on reader engagement and impact and has provoked a conversation on the topic that has reached far beyond the editorial considerations of our organisation." 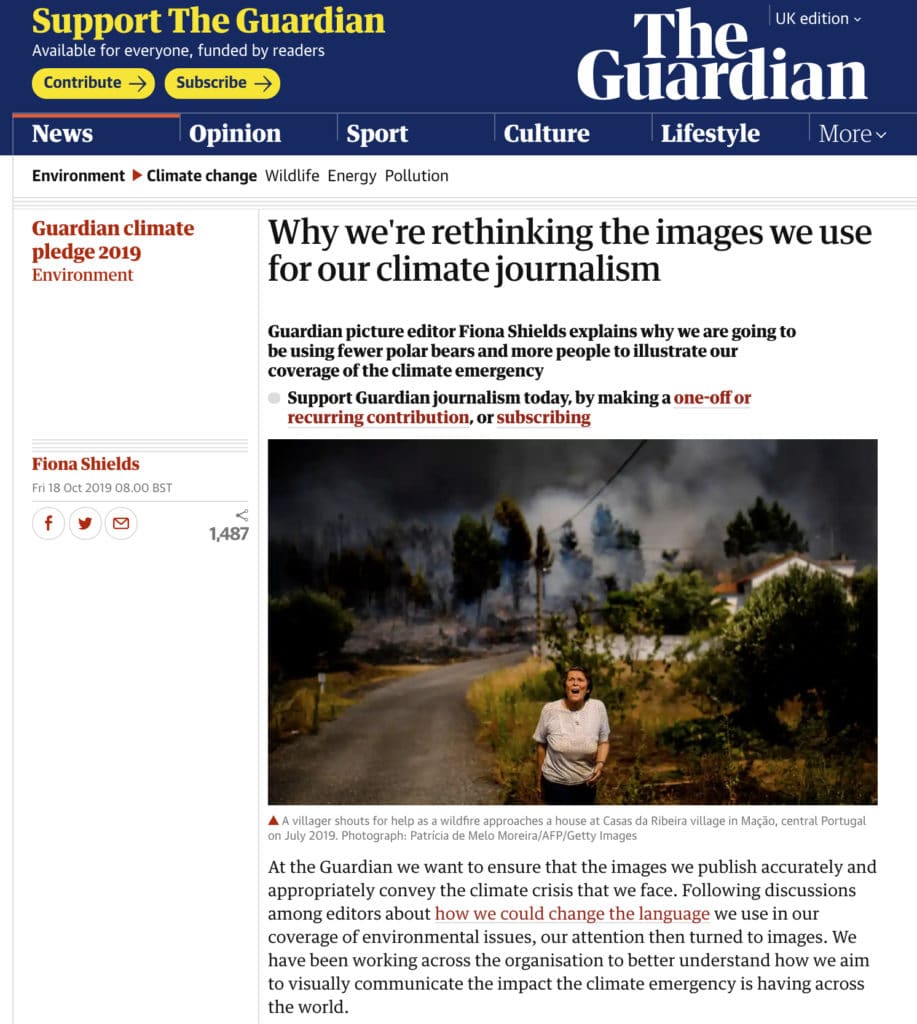 Just like the IPCC reports themselves, we believe the way IPCC authors engage with the public should be based on the best available evidence. Our projects with the IPCC include a Communications Handbook for IPCC authors, a curated gallery of climate images for communicating the Special Report on 1.5C – the first time photos were used by the IPCC to promote a new report – and a collection of public engagement case studies from IPCC WGI (Working Group I) authors around the world.

This is a beautiful Handbook and I wish I could have received such guidance when I was first involved as an IPCC author."

Conversations about climate change can often be difficult, but they play a huge role in social and political change: we take our cues about what’s important from what we hear our family, friends and colleagues talking about. Our Talking Climate handbook provides guidance on how to have climate conversations that leave you feeling inspired and connected. We have heard from hundreds of people about how it has changed the way they talk about climate change for the better, and climate scientist and communicator Katharine Hayhoe named our handbook one of her top two resources for how to talk about climate change. It was based in part on a citizen science project with over 550 people from over 50 countries carrying out climate conversations.

I’m feeling empowered to talk about climate breakdown after participating in this research by Climate Outreach. Aiming to break out of my echo chamber!”

Talking climate handbook – how to have a climate change conversation

Generating support from fossil fuel-dependent communities for a just transition

In Alberta, home to Canada’s oil sands, entire communities rely on fossil fuels for employment. Transitioning away from oil cannot happen without engaging them meaningfully and respectfully in the process. Working with local partners, we brought together oil sands workers, indigenous peoples, conservatives, environmentalists, rural Albertans, business leaders, youth and people of faith. Together, we found a way to replace an acrimonious debate with a constructive conversation based on shared values of what it means to be Albertan. This initiative has left a lasting legacy by training 75 local organisations to continue this work using our research methodology.

People really want to make a difference. They want to participate in these sorts of talks and they want to see the province move ahead. That was a neat thing to see, that people actually care."

Our influence has reached UN climate negotiations, the Platform on Disaster Displacement and the new compacts on migration and refugees. Our work has helped shift opinion on climate-linked migration – a complex, emotive and often polarising issue. We delivered the world’s first online course focused on climate-linked migration, attracting over 1000 participants from 40 countries, many of them from international migration agencies and local community-led refugee organisations working directly with displaced people. We helped them explore how climate change is reshaping migration and how to bring new voices from the places most affected into the debate.

Climate Outreach’s workshops, direct input and online resources have been formative in shaping our positions and work on climate migration, and in particular the perception of climate migrants and their representation in the media."

Women and children walking through flood waters that stretch as far as the eye can see.
Photo credit: Asian Development Bank / CC BY-NC-ND 2.0

Advising the UK government, European climate change think tanks and NGOs on how to more effectively communicate net zero with people from across the political spectrum

To tackle climate change, we need to bring greenhouse gas emissions down to net zero, achieving an overall balance between CO2 emissions produced and emissions taken out of the atmosphere. We asked ourselves how the concept of net zero – and the ambition contained within it – was understood by people. Our research into how best to communicate net zero included an analysis of the language being used in connection with net zero, and a set of narrative workshops with members of the public who hold centre-right views.

Taking the country and the world to net zero is a necessary but daunting challenge. As scientists we have a tendency to persuade by piling on the numbers and it doesn’t often work. This is where Climate Outreach can save us. By making a science out of climate communication, they ensure the right audiences get the right messages to drive action towards a more resilient net zero future."

Advising governments on how to successfully communicate carbon pricing

Most experts agree that putting a price on carbon is a powerful tool for tackling climate change, but successfully communicating this to people is a huge challenge that has tested governments round the world. Two groups administered by the World Bank commissioned us to produce a step-by-step guide on how to develop public engagement strategies around carbon pricing, and how to integrate them into the policy making process. With our partners Climate Focus, we’ve provided consultancy on carbon policy communication to governments around the world.

In Canada, we directly briefed the Minister of Environment and Climate Change. We are also designing Colombia’s national strategy for communicating their forthcoming carbon pricing policy, advising on all communications outputs from ministerial speeches to social media.

Engaging people from across the political spectrum, and in particular people who hold centre-right values

With political polarisation on the rise, we’ve been working with people who hold centre-right values to fill the vacuum where a coherent and compelling conservative narrative on climate change should be. We’ve helped a wide range of organisations develop messaging that is more inclusive through our freely available resources as well as consultancy work for a number of organisations including The Climate Coalition, WWF and the Welsh government, who have incorporated our insights into their communications and successfully broadened engagement. We’ve also recently informed the 10-year strategy of Germany’s key climate funder, Stiftung Mercator, in their efforts to ensure that polarisation on climate change doesn’t take hold in their country.

I’m very grateful for the insights that Climate Outreach are drawing from their research. It’s research that’s bringing understanding of the subtleties of tribal orthodoxies on climate."

The Climate Coalition, a network of over 100 civil society organisations including The National Trust, WWF and Oxfam, commissioned us to explore audience responses to proposed messaging for a multi-year campaign. We tested several messages with conservatives, trade union members and NGO representatives using our Narrative Workshop methodology. In contrast to the Climate Coalition’s original expectations, the most popular frame to emerge focused on ‘the things we care about which are threatened by climate change’. Based on our recommendations, the Climate Coalition developed their campaign around the message Show the Love.

This campaign asking people to share what they care about has taken place each February since 2015, resulting in thousands of events, including large-scale events put on by organisations such as Manchester United Football Club. In 2018 alone, 70,000 people wore and shared green hearts to start climate conversations around the country, and the campaign’s Green Hero Awards event was attended by the Prime Minister.

Climate Outreach’s insights were some of the clearest and most instructive I’ve ever commissioned. It helped ensure our compelling ‘Show the love’ campaign reached millions of people across the UK."

Find out how we can support your work