As scientists, you know that science is a process of refining theories and reducing uncertainty.

With an issue like climate change, there will always be uncertainties.

These uncertainties can be interpreted as meaning that the idea of anthropogenic climate change remains unproven.

The good news is there are ways your communication can minimise this misunderstanding (for more on the points below, have a look at our Uncertainty Handbook):

At school we get good grades by identifying the correct answer to the scientific problem, but in real life many scientific questions are not resolved definitively. As a result uncertainty in science is often misinterpreted as ignorance.4

One study found emphasising that ‘science is a debate’ as opposed to ‘science is a fixed body of facts’ influenced people’s motivation to act on uncertain messages.

So uncertainty will not always undermine the effectiveness of science communication, as long as it fits the audience’s understanding of how science works.

Shift from uncertainty to risk

Instead of talking about the novel and abstract uncertainties in global models of climate systems, use the familiar language of the insurance, health and national security sectors.

Although this might not seem a major difference, framing the issue as being about risk (rather than a set of predictions about the future) turns the problem into something that most people are used to dealing with (and that social scientists know a fair amount about).

Researchers have found that the more the risks of climate change can be brought to life through vivid ‘mental models’, the better (using clear practical examples of the risk of sea level rise, or the risk of melting glaciers). 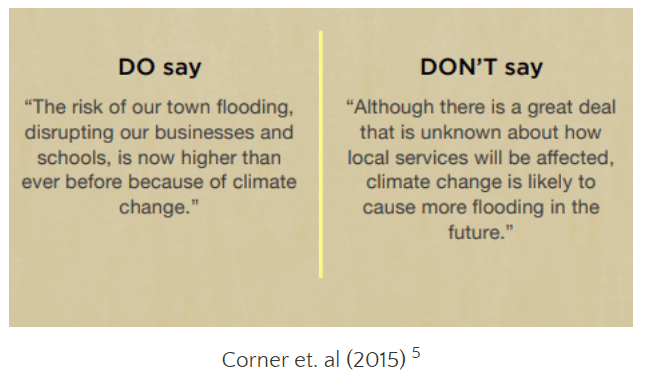 Focus on what we do know

Uncertainty should not prevent focusing on the ‘knowns’ in order to establish a common understanding with your audience.

On many fundamental questions — such as ‘are humans causing climate change?’ and ‘will we cause unprecedented changes to our climate if we don’t reduce the amount of carbon that we burn?’— the science is effectively settled.

Communicators should not shy away from stating that clearly.

It is well-established that in many countries around the world, members of the public dramatically overestimate the uncertainty associated with climate change science and underestimate the level of scientific consensus.6,7

Having a clear and consistent message about the scientific consensus is important because some research indicates it is a ‘gateway belief’ that affects whether people see climate change as a problem that requires an urgent societal response.

Communicate through images and stories

Most people deal in personal stories and visual images that can bring statistics to life. Have a look at our evidence-based Climate Visuals online library of images for practical guidance on how to better communicate about climate change. A case study can be worth a thousand probability statements. 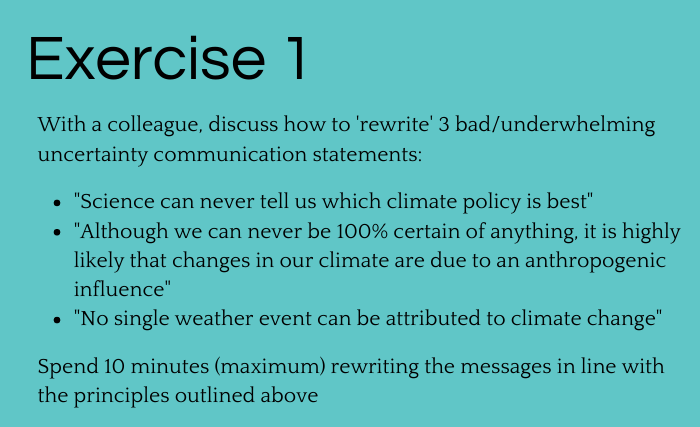 The content of these webpages draws on a series of workshops created and developed by Climate Outreach and the Tyndall Centre for Climate Change Research as part of the Helix project.