At the international level, there’s no question that fairness and equity play a central role. From the ‘polluter pays’ principle to the notion of avoiding ‘dangerous’ climate change, justice is never far from the international negotiating table. But at a domestic level in the UK, the concept of justice has been noticeably absent from political and public debate – a situation which an important new website backed by the Joseph Rowntree Foundation (and other partners) looks set to change.

‘Climate Just’ takes a powerful new approach to thinking about how climate change will affect the UK, defining climate-disadvantaged communities as those who are exposed to climate hazards and who are socially vulnerable in some way. As the website explains, groups who are likely to be climate-disadvantaged include the elderly, people in poor health, those with low incomes, and people who are socially isolated.

It should not be surprising that people who face challenging circumstances will be more vulnerable to changes in their environment, and potentially less well-equipped to cope with them. But yet this ‘obvious’ truth is very rarely part of the conversation about climate change. What the Climate Just project makes clear is that climate policies cannot be detached from other social policies – and that justice, fairness and a commitment to tackling social inequality should play a much bigger role. 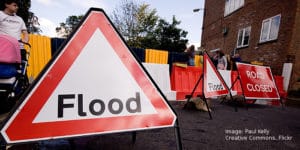 The website contains a number of case studies which highlight how intertwined social vulnerability and climate impacts can be. For example, a small village in North Yorkshire established a group to help clear snow for carers working with disabled and elderly people – a clear example of how quickly extreme weather affects vulnerable people. In Islington, the Seasonal Health Interventions Network was established to provide a more holistic response to closely-related problems such as fuel poverty from rising energy bills and winter deaths from poorly insulated homes.

Opponents of decarbonising the energy sector have sometimes argued that measures to tackle climate change may penalise people on lower incomes. What the Climate Just case studies make clear is that there is no contradiction in tackling climate change while also reducing social inequality: the two should go hand in hand. But there is clearly a great deal of work to be done before socially just climate policies become the norm.

Politicians should be confident that embracing climate-just policies will not be unpopular with the voters. Research by the Understanding Risk group at Cardiff University found that ‘fairness’ was one of a handful of core principles on which people believed energy policies should be based on. COIN’s own research has pointed to the importance of ‘protecting the vulnerable’ as a potentially powerful narrative with which to engage communities around extreme weather events and climate change. And campaigns like the ‘Energy Bill Revolution’ have started to bring justice into the heart of debates about home-heating, focussing on the vital role that widespread energy efficiency and home insulation can play in reducing fuel poverty and carbon emissions.

But while this is a crucial part of the puzzle, the Climate Just project shows that the wider challenge is to embed the principle of fairness and justice at the centre of all climate and energy policies – from home insulation programmes, to coastal adaptation initiatives, to community energy projects.