This piece was written for Ira Wagner’s photography book Houseraising: The Jersey Shore after Hurricane Sandy. George visited the Jersey Shore shortly after 2013’s Hurricane Sandy and highlighted the absence of any conversations about climate change. Five years later, he reflects on how the piecemeal raising of the Jersey seashore houses represents a new visual expression of inequality and a missed opportunity for climate change mitigation.

Even four months after Hurricane Sandy, the devastation was still clear to see all along the New Jersey shore: the tangled remains of the Casino Pier roller coaster that had tumbled into the sea at Seaside Heights; buildings with their side walls ripped off or careening at crazy angles; and block after block of dark abandoned housing.

I was in New Jersey to research my book on the psychology of climate change. I was especially interested in observing how the experience of an extreme record-breaking weather event might affect people’s attitudes and behavior, and wondered whether the response of people along the New Jersey seashore might foreshadow how other people would respond to the acceleration of climate change. This is why Ira Wagner’s photographs, fascinating as a historical record, also have a wider significance for the clues they provide about how the built environment, and people’s relationship to it, might alter in coming years.

I interviewed people all along the New Jersey seashore about their experiences, and I heard many stories of bravery, optimism, and despair. People spoke with great pride about the kindness of neighbors and the strength and resilience of their community. As I had anticipated, people acted out Elisabeth Kübler-Ross’s famous stages of grief, moving from shock to anger—which they focused on FEMA, the insurance companies, and the government.

Scientists had been warning for 20 years that climate change would bring greatly intensified storms. Surveys tell us that the large majority of people in blue-state New Jersey accept that climate change is real and caused by humans. Yet in the interviews, people looked puzzled by my question, as though they could not see its relevance to their own experience.

A large body of existing research finds that people respond to climate change by deliberately distancing it: placing it far in the future, or only affecting people or wildlife at the farther ends of the Earth. What I had not anticipated was that people might be even less willing to accept climate change when extreme weather came to (and sometimes through) their own front door.

Was Hurricane Sandy caused by climate change? The scientific opinion is that the rapid rise in greenhouse gases is now affecting all weather patterns to some degree. Scientific evaluation of Sandy consistently identifies climate change as the key factor in supercharging a naturally severe storm into a catastrophic one.1 The statistics bear this out. Sandy was exceptional by every standard—the largest hurricane that had ever been known to form in the Atlantic Basin, generating wave heights 25 percent higher than any previously recorded, with impacts that rank it among the three most expensive storms in US history.2 The media adoption of the phrase “a climate on steroids” seems entirely appropriate.

Even if there was some lingering doubt about attribution, this should not have closed down discussion; in fact, one would expect that it would have stimulated a lively debate and search for answers. Normally, when people suffer extreme events, they are inclined to search around for explanations, however bizarre, and keen to allocate blame, however unjustified. Climate change, though, doesn’t fit neatly into blame narratives. There really is no direct enemy, unless we look deeply at our own behavior and lifestyles and recognize the complex way that we interact with our environment.

If, by contrast, these small towns had been devastated by a mass shooting, it would have led to intense soul-searching. Gun advocates always try to close the debate around gun control that follows a mass shooting, saying that this is not the time to “exploit a tragedy.” And they always fail. Following the Sandy Hook Elementary School shooting in Connecticut, the families of the victims demanded federal action on gun controls and have continued to do so.

So I wondered whether the people of New Jersey might be interested in focusing their anger on those who had, for so long, blocked action against climate change. In 2013, I interviewed Dina Long, the mayor of Sea Bright, an inspiring and charismatic leader who had mobilized her community around a narrative of reconstruction and renewal. When I suggested to her that she might like to lead a delegation of New Jersey officials to Washington to demand action on climate change, she looked at me as though I were completely crazy. “Of course climate change is happening. Duh!” she said. “But it is bigger than anything we could make a difference on. We just want to go home, and we will deal with all that lofty stuff some other day.”

Writing this five years later, I can see no evidence that “some other day” is ever likely to come. There is still no campaign, action group, or civic voice that connects the personal tragedies of Hurricane Sandy with wider climate policy.

The narrative that Dina Long and everyone else wanted to share was the one of valiant recovery: that people came together and supported each other, and that their community is now stronger than ever before. Undoubtedly this was true during the storm and its immediate aftermath. Disasters often bring out the very best in humanity, as documented in Rebecca Solnit’s excellent book A Paradise Built in Hell.

But there is always a tension between cooperation and self-protection—in particular, the overwhelming desire to protect one’s own interests and property.  In this respect, Ira Wagner’s photographs are especially revealing, reflecting the dominance of individual property ownership over all other values. The urban landscape of the New Jersey seashore is being rebuilt to protect individual property, producing strange and jagged skylines. For all the talk of the renewed social cohesion, the visual landscape looks extremely unequal, dividing people vertically into the protected, the unprotected, and the abandoned. The architecture of this reconstruction is also strikingly uncooperative, with no attempt to maintain a consistent aesthetic or shared civic identity in the fractured streetscape.

Of the interviews I made in 2013, the ones that left the deepest impression on me were those I held with the former residents of the Paradise Trailer Park on the outskirts of Sea Bright. Sandy had pummeled the flimsy trailers into match wood. One of the residents survived the storm surge only by perching on top of his refrigerator.

They were poor and struggling, and many were still homeless when I spoke to them in the street alongside the battered remnants of their former homes. Towering on a bluff behind us was the sprawling mansion of one of the financiers who catch the daily hydrofoil to Wall Street. The hedge-fund palace had been protected from the storm surge by its height, but this did not prevent the financier from putting in a six-figure insurance claim for damage to his siding and gutters. 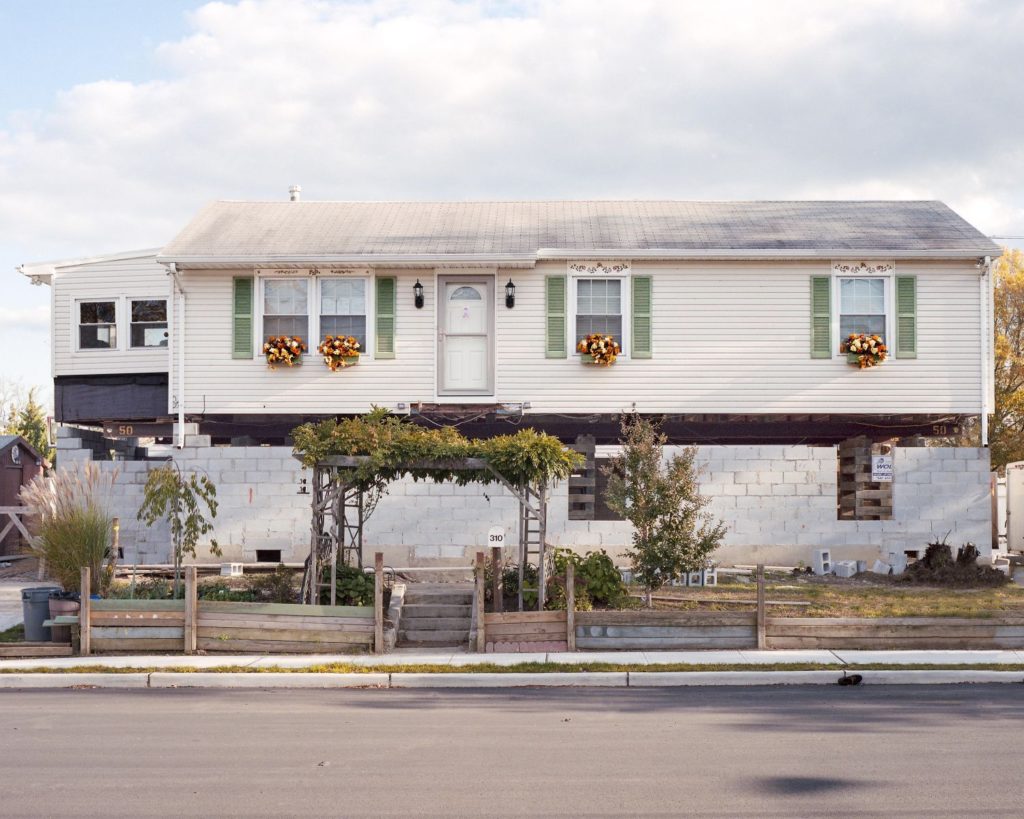 House raising on the Jersey Shore

When I look at Ira’s photographs of houses being jacked high above the ground, I wonder whether they represent a new visual expression of inequality. Cities have always embodied a topography of privilege that leads the rich to live on Nob Hill or in a condominium high above the slums and smog. Will one’s ability to live above the storm surge or monopolize the high ground be the primary mark of status in future climate extremes?

The photographs also reveal an adaptive response that, to a cultural outsider, appears to be uniquely North American. In Europe, our solid brick and stone buildings hold up relatively well to extreme weather, but they can’t move, and people in flood zones have to resign themselves to the damage or leave. The very lightness of American timber building reflects a native culture of high mobility and flexibility that creates buildings that can be rapidly and cheaply assembled, dismantled, extended, or shifted in any direction.

I feel that the photographs also speak of something deeper in the culture that has always led Americans to adopt extraordinary engineering solutions to urban challenges. In the 1850s, all the streets and buildings in central Chicago were raised to improve the drainage of the sewers into Lake Michigan. In New York, the entire 3,700-ton Empire Theatre was moved 170 feet along 42nd Street. Boston responded to chronic traffic congestion with the “Big Dig,” which buried Interstate 93 underground. The final price tag of $15 billion could have funded a visionary policy to reduce traffic loads. However, the response to a systemic problem—one closely related to climate change—was one of engineering-based adaptation rather than creative and complex mitigation.

These two categories are central to understanding climate change. Adaptation measures change living and working patterns to cope with the new climatic conditions. Mitigation measures reduce the emissions that create those problems in the first place. A rational and coherent response must always contain both aspects.

Ira’s photo-documentation shows a visually remarkable adaptation. But just as telling is the total absence of any mitigation response. There are no solar panels, no signs of new energy systems or efficiency measures, no new cycle paths or electric vehicle charging points.

If it is hard to identify a conversation that has not taken place, it is just as hard to notice something that has not been built. These two absences are related. A public conversation that recognized the transformative reality of climate change might have generated a very different, but no less positive, reconstruction that embraced both adaptation and mitigation, alongside a renewed sense of civic pride and identity. It could have channeled some of the estimated $37 billion costs of rebuilding the New Jersey seashore into their reinvention as world-leading models for low-carbon communities.  And in so doing, it could have built on New Jersey’s ambitious goal of producing 22.5 percent of its electrical power from renewable sources by 2021.

The piecemeal raising of the seashore houses can be read as a lost opportunity—a warning that the failure to discuss the root causes of extreme climate events can lead only to aberrant responses that force people apart just as they had, for the first time, truly come together.

George has 30 years experience at all levels of communications and advocacy – from community level protest movements, to senior positions in Greenpeace and the Rainforest Foundation, to advisory roles for governments, businesses and international agencies. He is an award winning documentary maker and writes regularly on climate change issues including articles for The Guardian, The New Statesman, New Scientist and The Ecologist.

He is also the author of two books, Carbon Detox (Hamlyn Gaia, 2007) and Don’t Even Think About It: Why Our Brains Are Wired to Ignore Climate Change, listed by Esquire as one of the ’15 essential books on climate change’. Go to George’s Wikipedia page for more information about him.