There are three consistently trusted sources of information on climate change across the segments: climate scientists, David Attenborough and environmental charities. The power of relatable, everyday testimony is reinforced by the consistently high trust assigned to ordinary people who have been impacted by floods or fires (i.e. the victims of climate impacts).

Mural of David Attenborough - seen as a trusted messenger across all seven segments - in Sheffield
Photo credit: Cofiant Images / Alamy

But overall trust levels are generally low across the segments, suggesting that many of the most visible existing messengers are not connecting well with large parts of the population. The vote of confidence in environmental charities, for example, does not extend to environmental activists, with a clear gap in levels of trust in Extinction Rebellion (XR) and school strikers between Progressive Activists and the rest of the population. 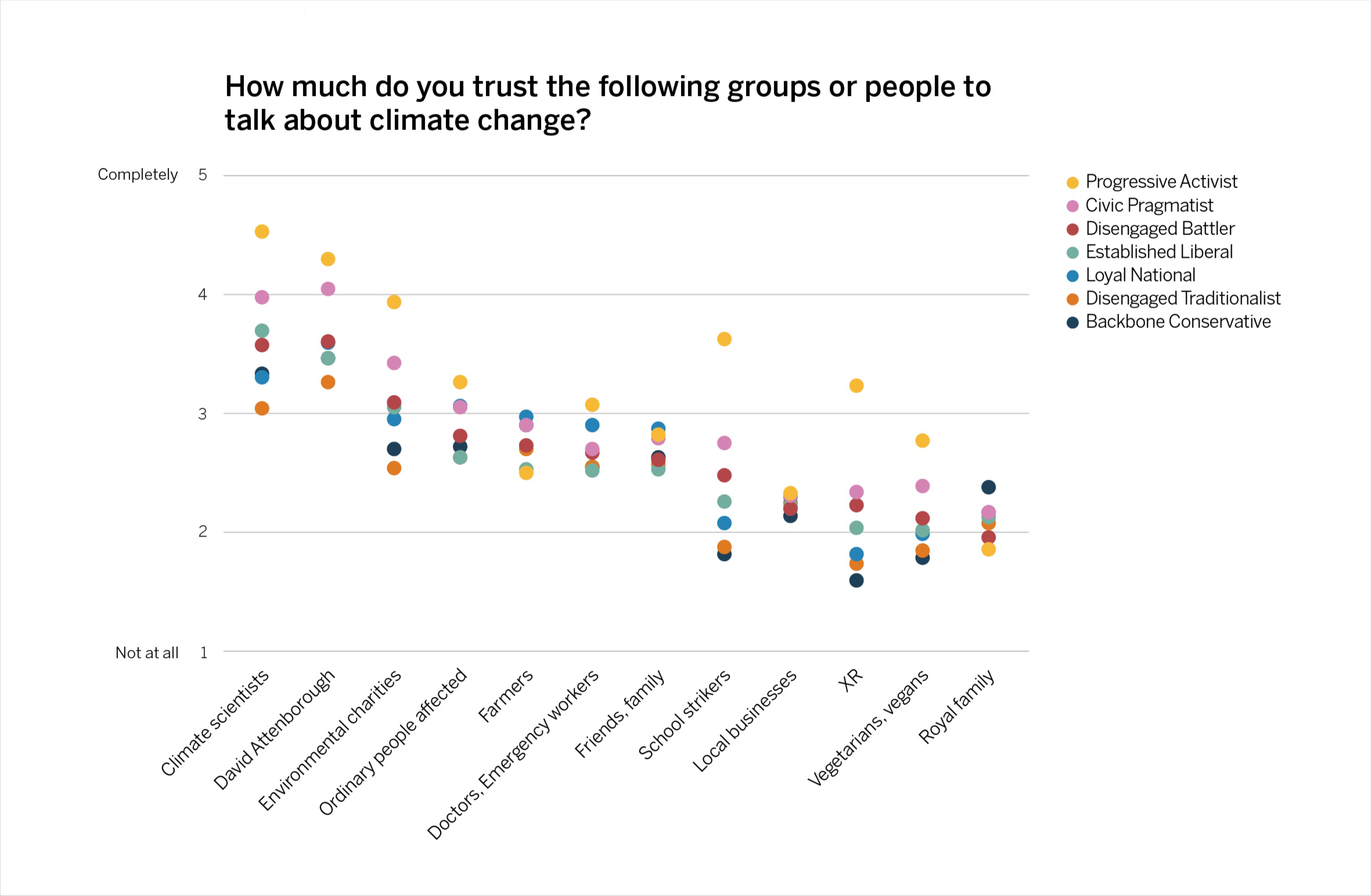 In focus groups, the majority of participants across almost all segments were critical of the tactics of groups such as Extinction Rebellion, including segments who might be considered ‘allies’ of activists (if not activists themselves):

...they definitely need to be aware that there could be irritating people sometimes, maybe stopping them doing their daily job. Yeah, they need to just be careful about not upsetting the general public, rather than taking them along with them.”

...when you hear it is just a lot of, to be slightly disparaging, kids who just make a lot of noise and are being very weird. It puts off a lot of people who might otherwise be paying more attention. Unfortunately, they can be a bit counter to the cause in some ways.”

There is also a lack of confidence, across most of the segments, in friends and family as trustworthy sources of information – but people tend to underestimate the effect of social influence on their behaviour. Given how important peer-to-peer communication is for persuading and engaging on a wide range of issues, this represents an important area for campaigners to focus on (supporting people to talk about climate with their friends and social networks), to help protect against a culture war.

In order to more deeply interrogate the issue of trust, we asked participants about specific people that they may see as trusted messengers for climate change information. Of these, David Attenborough was the most trusted figure on average, and politicians such as Boris Johnson, Alok Sharma, and Rishi Sunak were the least trusted. 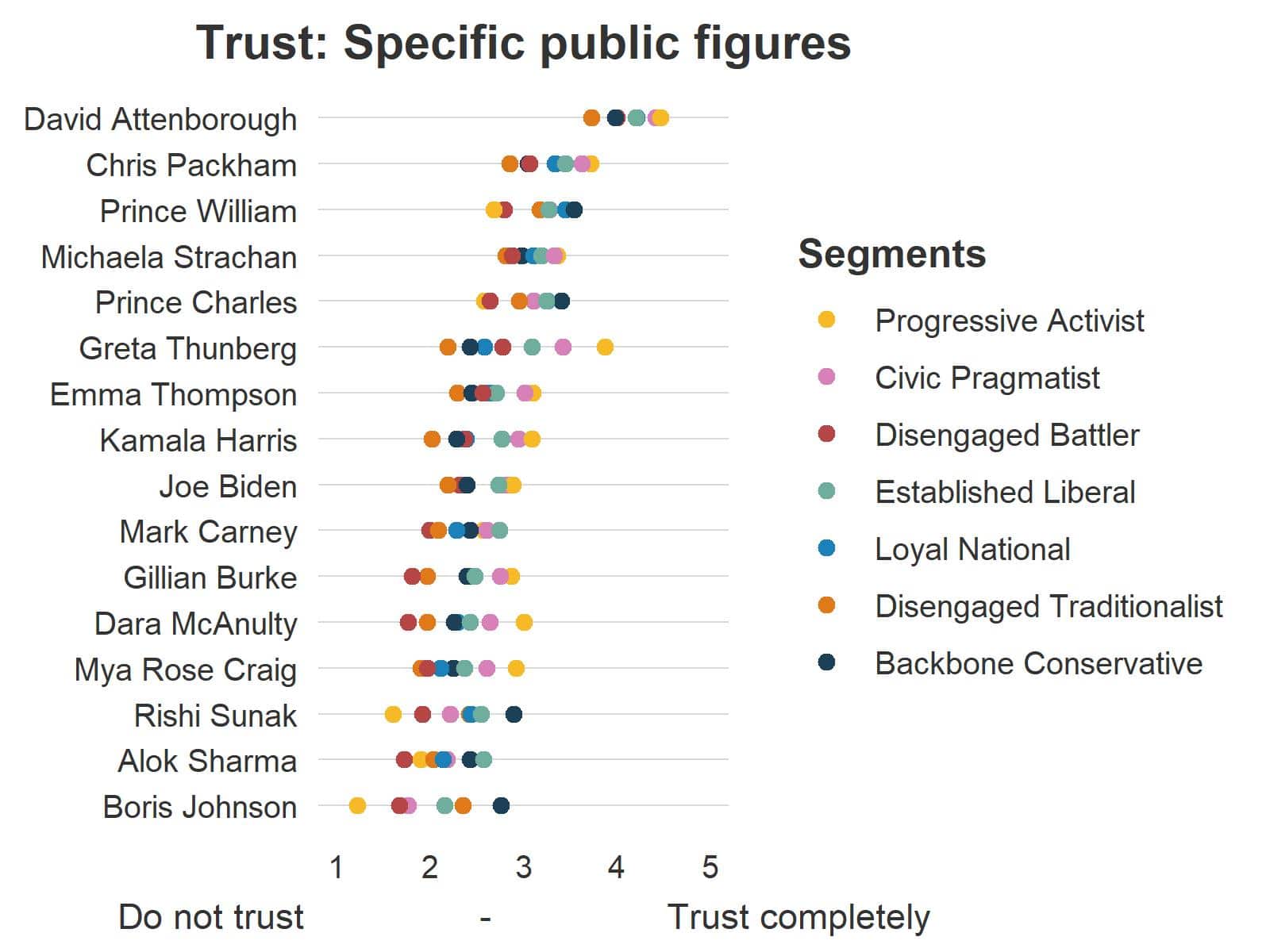 People reacted negatively to perceived hypocrisy from public figures, and this has the potential to erode trust even further.

I don't buy into it any more. I'm not an anti-vaxxer, I don't go for conspiracy theories, nothing like that. It's just little things that really got to me. It was that summit that they had, they all flew there and then they had the bare-faced cheek to tell us to be, 'Don't go flying anywhere,' you know, Prince Charles telling us, 'Don't fly anywhere and he fills his car with wine.' The Queen telling us about climate change and the environment and she's there on her Windsor Estate, in her diesel Land Rover and then a separate one on the same estate with her dog and a chauffeur. I was fuming, absolutely fuming. It's just, I think, well, it can't be that big of an issue, can it, if they're all telling us that it's awful, you know, start eating lentils, go around on a pushbike, never fly anywhere but yet they do the complete opposite.”

Broadening out from just climate change, people generally felt that their interests and concerns are not represented by various groups in society, and many found it difficult to think of people in the public eye that they admire or feel have their interests at heart. There is some level of trust in various charities, particularly those that help vulnerable citizens, the environment, or animals, suggesting that these are potentially actors who could work to build trust.

Politics and the media: a crisis of trust

They [the government] need the will to [act on climate] it. And I don't think they’re ever going to have that. Because it’s not politically expedient to do so. So, they’re not going to.”

In the last election there was little choice ... I would like there to be another choice.”

In answer to your question about who you trust, basically nobody because everybody’s got their own agenda. Everybody’s going to be working in their interests. So you just listen to what they say and vote for whoever you think is going to do the best for you.”

Low levels of political optimism and trust are correlated with low levels of political engagement. Although a majority in every segment voted in the last general election, turnout is much lower at local elections, and only a very small number have attended a political meeting or surgery. A majority of Progressive Activists (78%), Civic Pragmatists (59%) and Loyal Nationals (50%) have signed a petition in the past year, but only Progressive Activists consistently follow what’s going on in politics on a regular basis (50%) and share political content online (51%).

I think worrying about the political nuances or whatnot is a short-term thing when, if we destroy the world that we live in, all of the other issues are going to become secondary and meaningless.”

There are a number of potential reasons for this. A majority in every segment are exhausted by the division in politics (60%) and political parties are listed as the top or second-to-the-top cause of the deepest divisions in the UK by all but Backbone Conservatives. Every segment tends to feel politicians don’t care about people like me (77%), and all, except Established Liberals and Backbone Conservatives, tend to believe the system is rigged to serve the rich and influential (67%).

A decline in political trust could undermine support for political engagement and the capacity of government to act, ultimately leading to policy inertia or failure. The challenge is to prevent pessimism from generating a feeling of helplessness that could reinforce the idea that we, as a society, are too weak to change “the system” and deal with an issue as systemic as climate change.

People will talk big, make it a big political issue, talk big and do stuff. But there is no actual physical action taking place saying, ‘okay, we are doing this’ or ‘we are supposed to do this’. It doesn’t happen. It won’t happen.”

There is also a pervasive lack of faith in other democratic channels.

People tend to feel more confident (60%) than anxious (40%) about technological change, and their behaviour supports this. Every segment except Established Liberals and Backbone Conservatives is more likely to use social media (61%) than watch TV news (54%) or read a newspaper in print or online (38%) on a daily basis.  And these channels are – to some extent – competing with more traditional sources of information about government and politics. 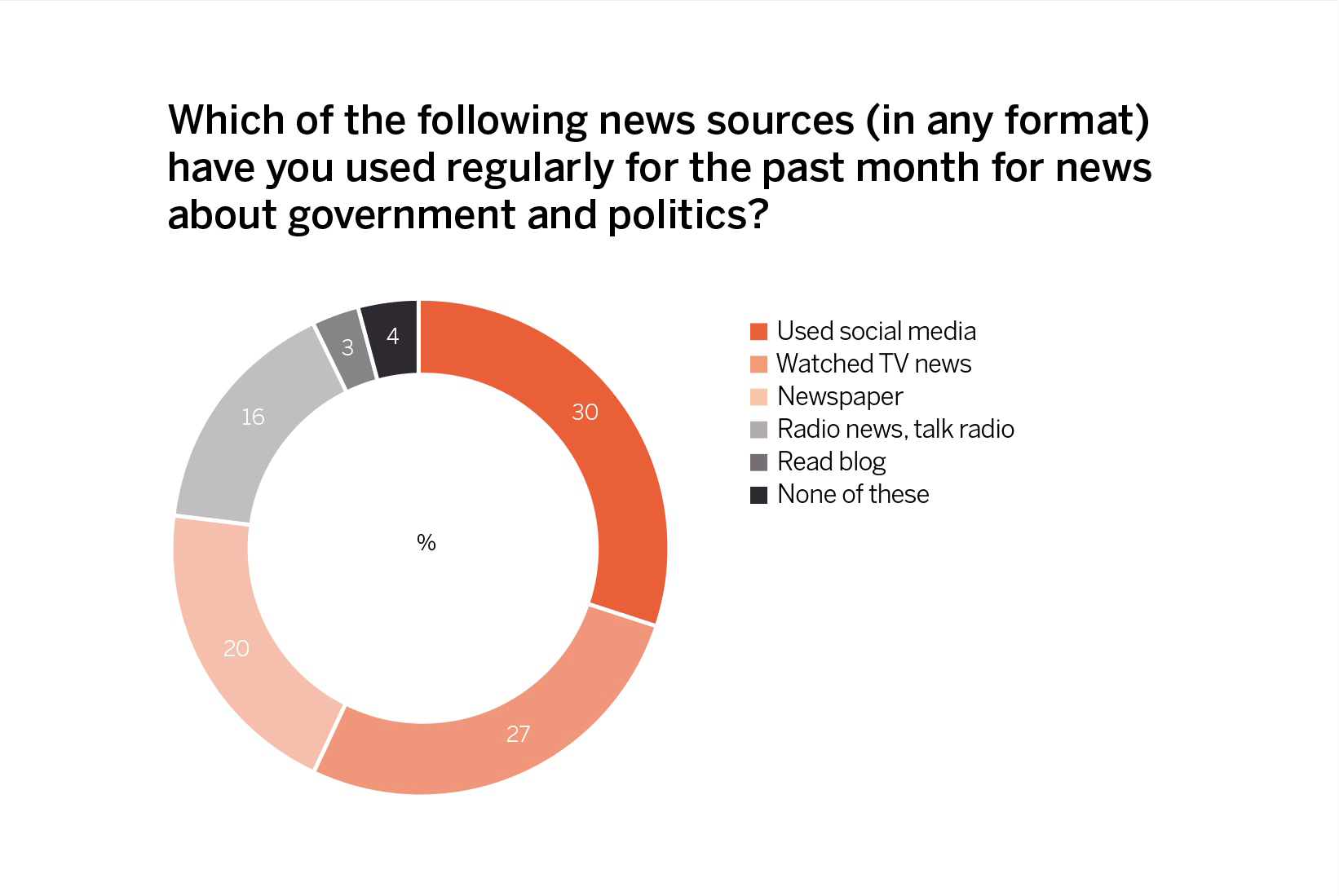 However, social media and traditional media are ranked as the second and fourth biggest causes of division in the UK, higher than the class system, the economy and regional tensions. All segments blame the media for making our country feel more divided than it really is (73%) and feel that social media over-represent the most extreme voices (71%). Overall, this is driving high levels of concern about the aggressive tone of public debate in the UK (66%) and the questioning of everything that I see online and in the media (57%).

The way the media spins things … it makes it harder to have constructive conversations.”

You don't know what false news is and what's real. At the moment I don't trust the media for what they're reporting.”

I think the tabloid newspapers are sometimes just so sensationalist, so biased. Their job is to report the truth. They’re journalists.”

It seems to be so difficult to tell what’s real news and what’s fake news these days … I think you have to question everything that you read.”

In this ebbing of trust, which affects people’s views about whether democratic processes designed to empower citizens are working, we see a desire for interventions to strengthen positive outcomes for society. Nearly three-quarters (74%) think governments need to better regulate social media companies, with more than 65% support in every segment.

Next:
Justice and inequality