It is clear that there is substantial variation in attitudes towards race, racism and immigration. ​While there is agreement across the segments that a person can be British regardless of their colour, ethnic background or accent (61% ‘strongly agree’, 31% ‘somewhat agree’), the majority tend to feel that British identity is disappearing nowadays (57%), at least among white Britons. A majority of Britons from BAME or mixed race backgrounds tend to agree that British identity is being strengthened through diversity. Across the segments, only a majority of Progressive Activists agree with this statement (70%). 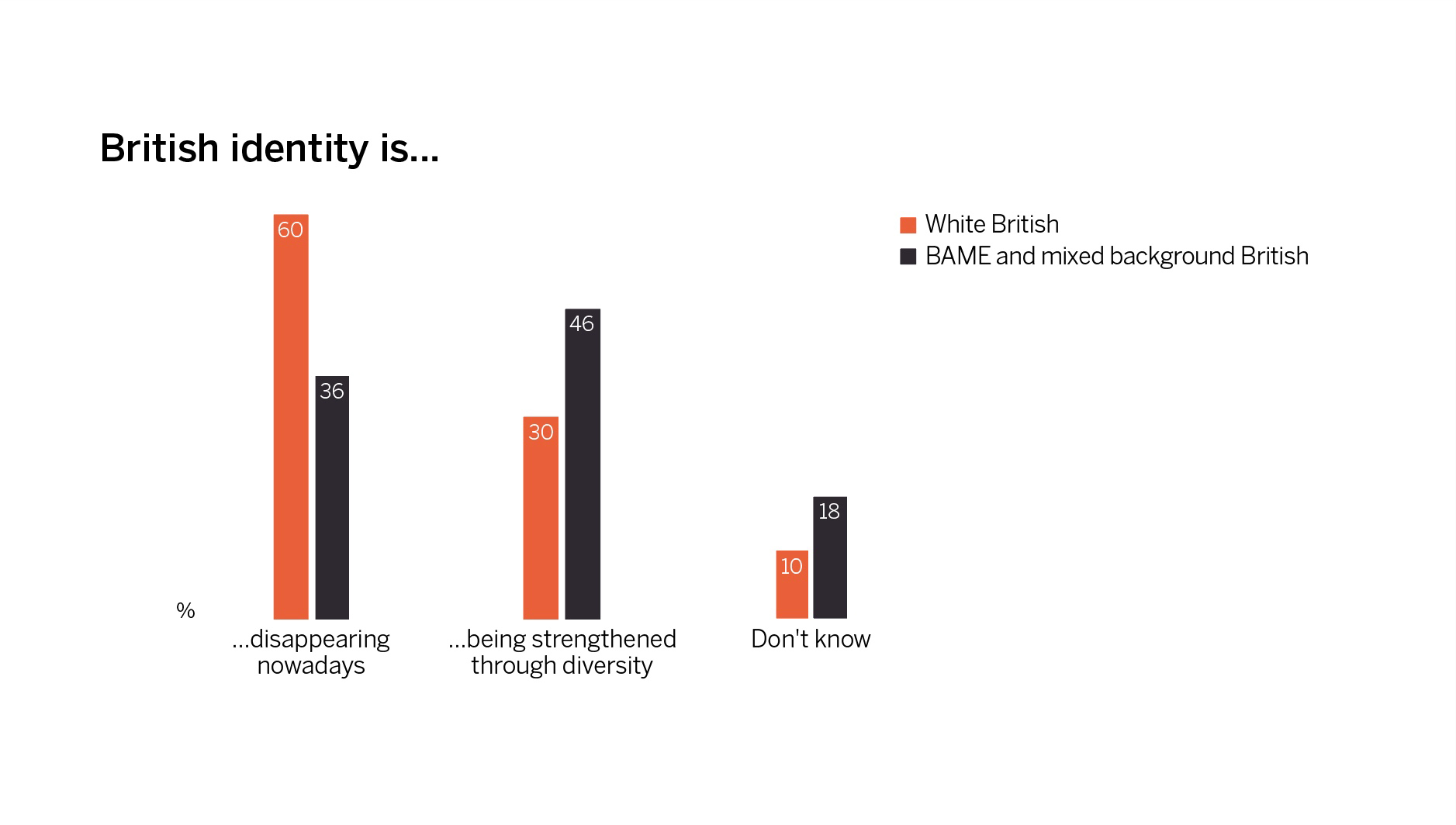 Protesters respond to the the death of George Floyd at a day of action against discrimination in London
Photo credit: Guy Bell / Alamy

Although every segment agrees that racism (33% ‘very serious’, 44% ‘somewhat serious’) and anti-semitism (25% ‘very serious’, 37% ‘somewhat serious’) are problems facing the UK today, they diverge in their opinions about how to deal with them, and who or what is to blame. Again, there are differences between Britons from BAME and mixed race backgrounds and white Britons: the majority of the latter believe that people are too sensitive about race, whereas the former believe it is not being taken seriously enough. 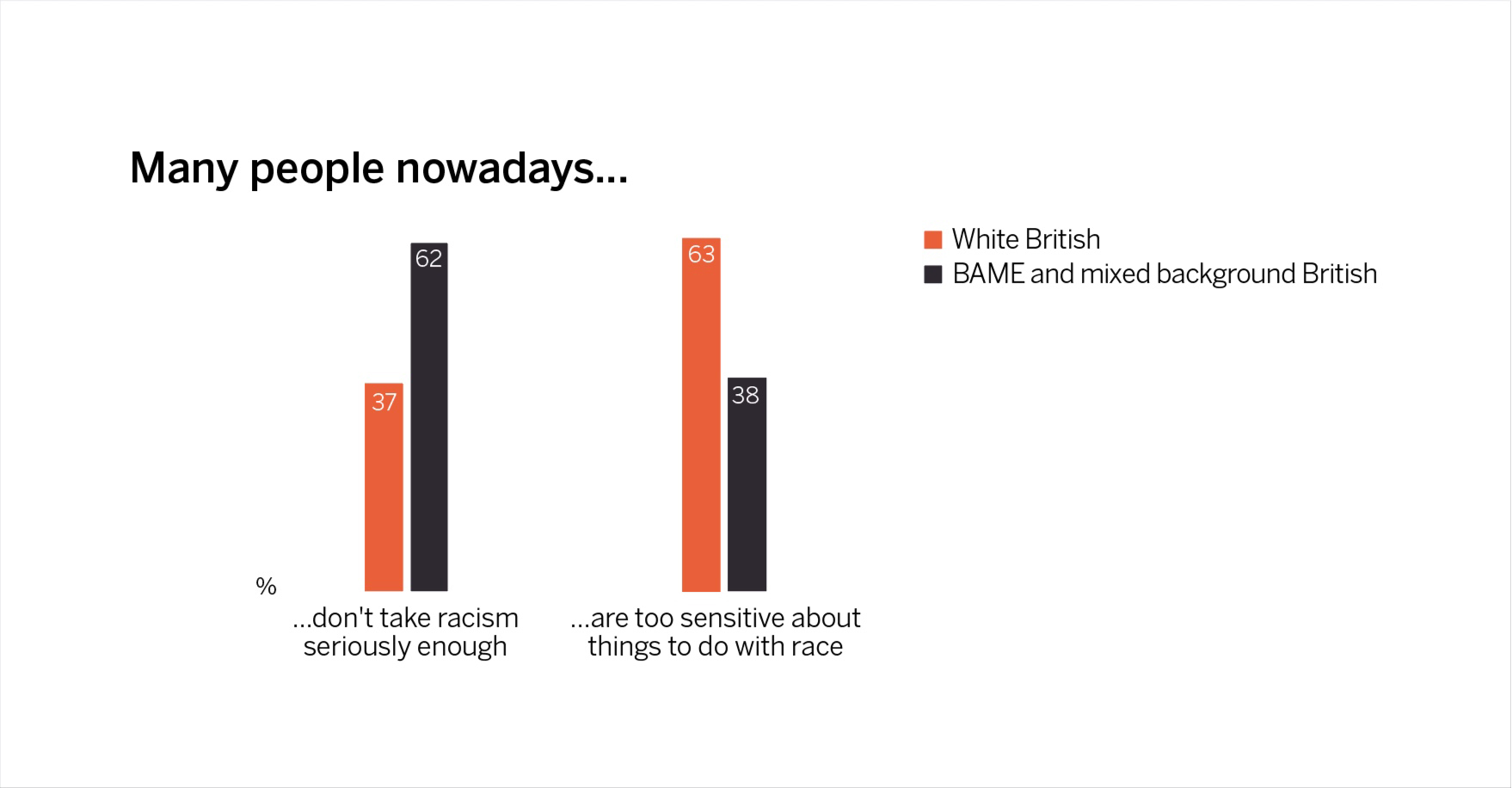 Only Progressive Activists, Civic Pragmatists and Disengaged Battlers tend to feel that we should acknowledge the mistakes made during the period of the British Empire, with the rest believing that there is no point going over the rights and wrongs of our history.

In terms of present-day privilege and advantage, Progressive Activists, Civic Pragmatists, Disengaged Battlers and Established Liberals tend to feel that white people still have advantages over people from ethnic minorities; whereas Loyal Nationals, Disengaged Traditionalists and Backbone Conservatives tend to believe that white people and people from ethnic minorities are treated the same and have the same opportunities.

The latter three segments see immigration as a threat, with all agreeing that immigration has a more negative than positive effect on the UK, and that we seem to care more about immigrants than about British citizens. They all say I worry about becoming a minority in my own country. 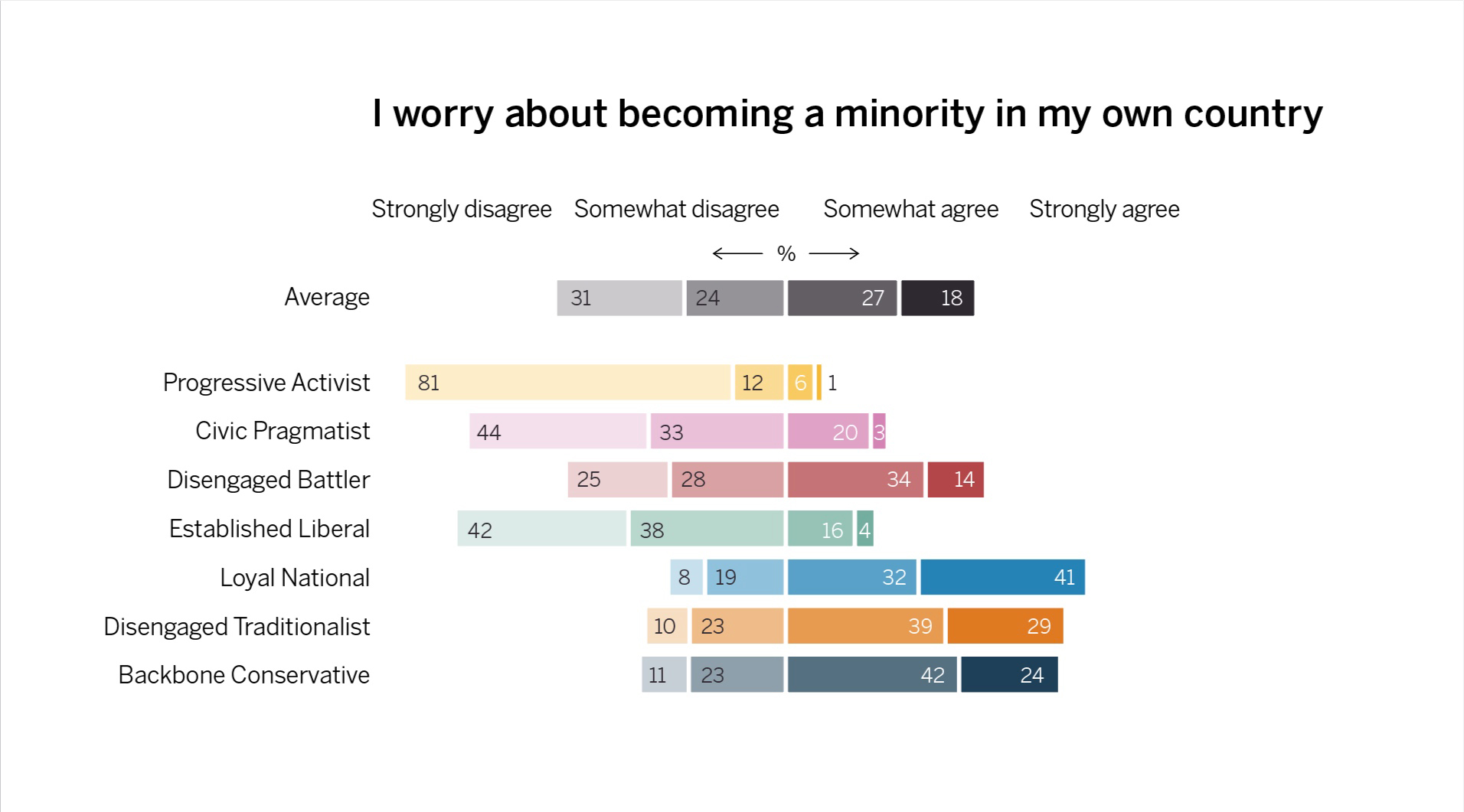 Worry about becoming a minority, by segment

These views are often at odds with the values of environmental activists, and reveal a clear tension. On the one hand, climate change is beginning to drive patterns of migration and displacement around the world, so immigration and climate change are becoming inextricably linked (in a way some segments would view as a growing risk or threat). On the other hand, and reflecting a surge in awareness around the Black Lives Matter movement, the climate crisis is increasingly seen (by other segments) as a problem grounded in racism. The challenge for campaigners is to provide consistent messages about how inequality and migration are linked to the climate crisis in a way that helps mitigate rather than exacerbate a culture war.

​There is greater consensus on issues of gender: all segments are proud of the advancements we have made in equality between men and women (23% ‘strongly agree’, 53% ‘somewhat agree’), although more Backbone Conservatives feel that we give an advantage to women over men than the other way round. 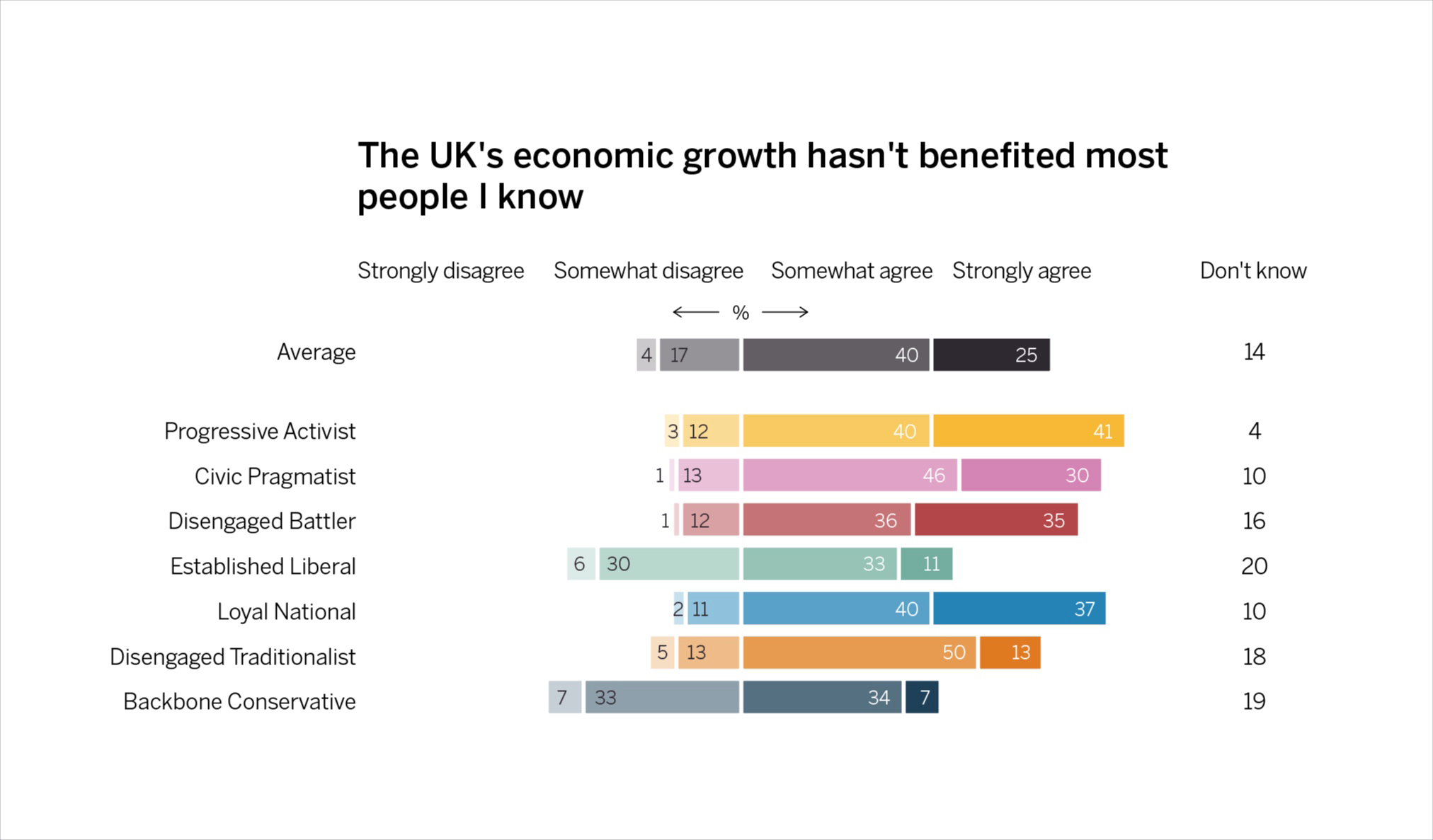 Perceptions of wealth inequality across segments 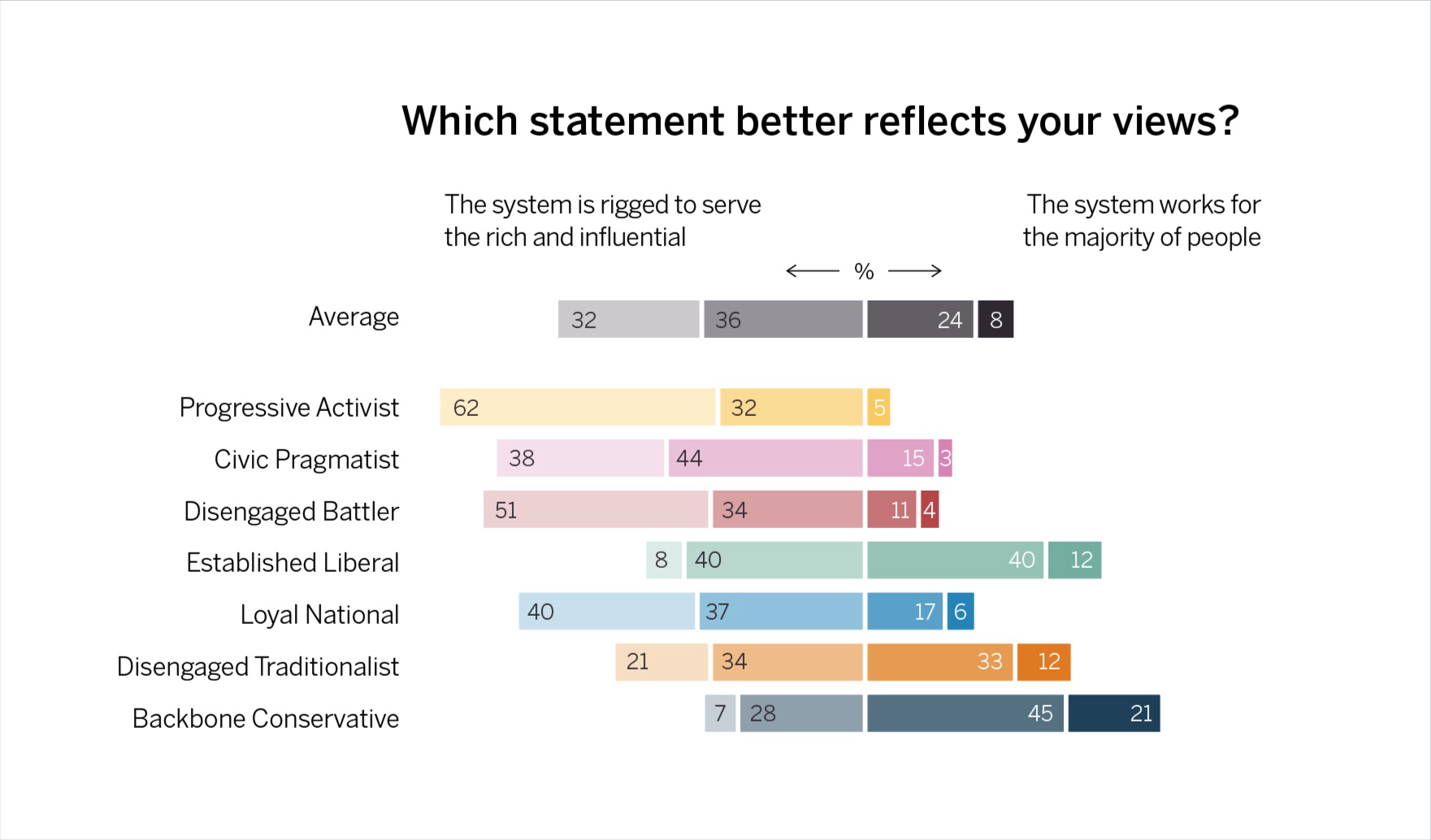 Views on whether the system is rigged, by segment

Next:
Shifts during Covid-19