Every segment is worried about climate change, to a greater or lesser extent.

Worry about climate change across segments

A majority in all of the seven segments agree that climate change is caused by human activity (although the majority is slimmer for Disengaged Traditionalists).

Understanding of causes of climate change

There is relatively high recognition that the UK is already feeling the effects of climate change (just below 60% overall, which is supported by wider recent UK polling on perceptions of climate impacts), although the two ‘Disengaged’ segments remain somewhat unconvinced. 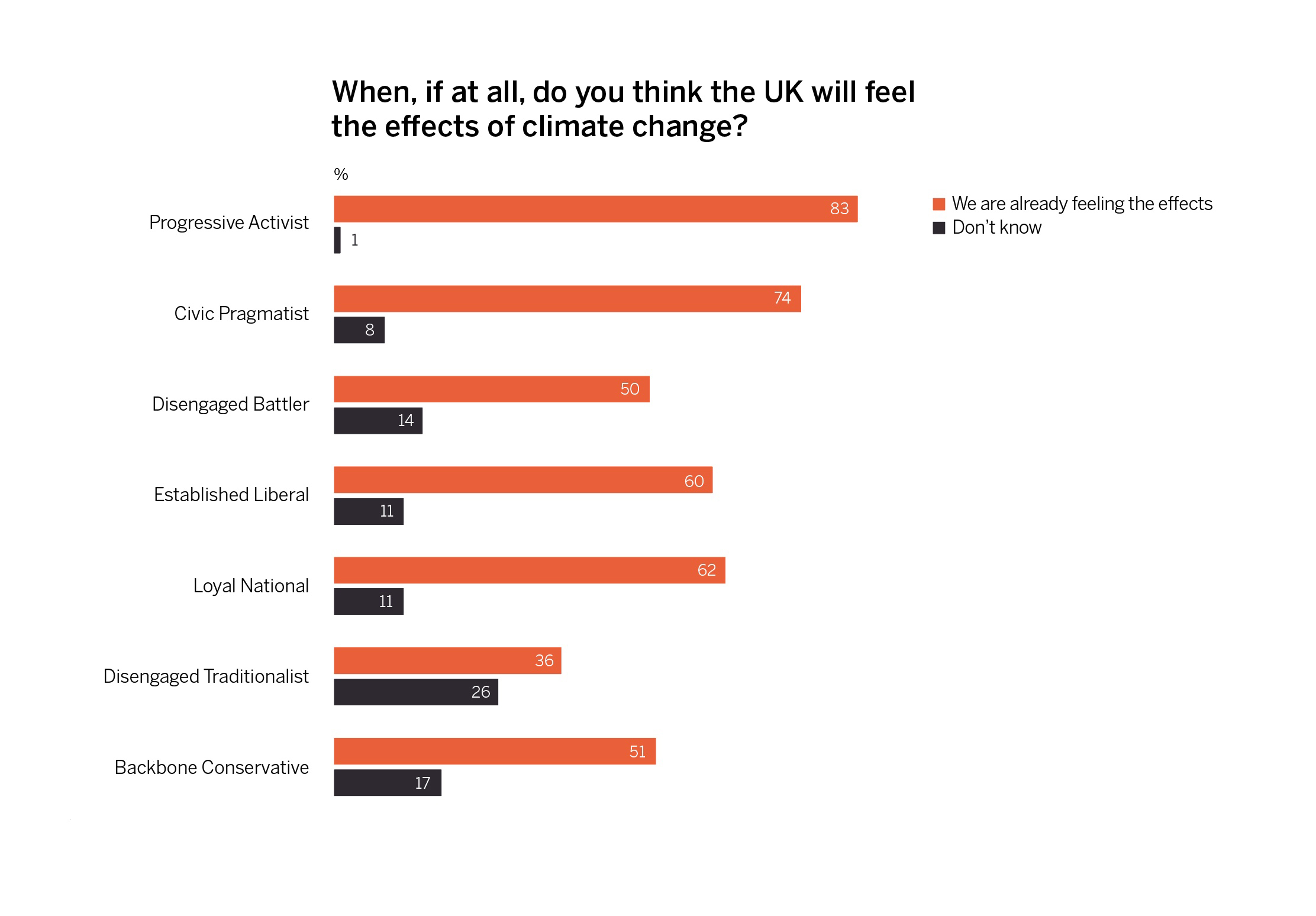 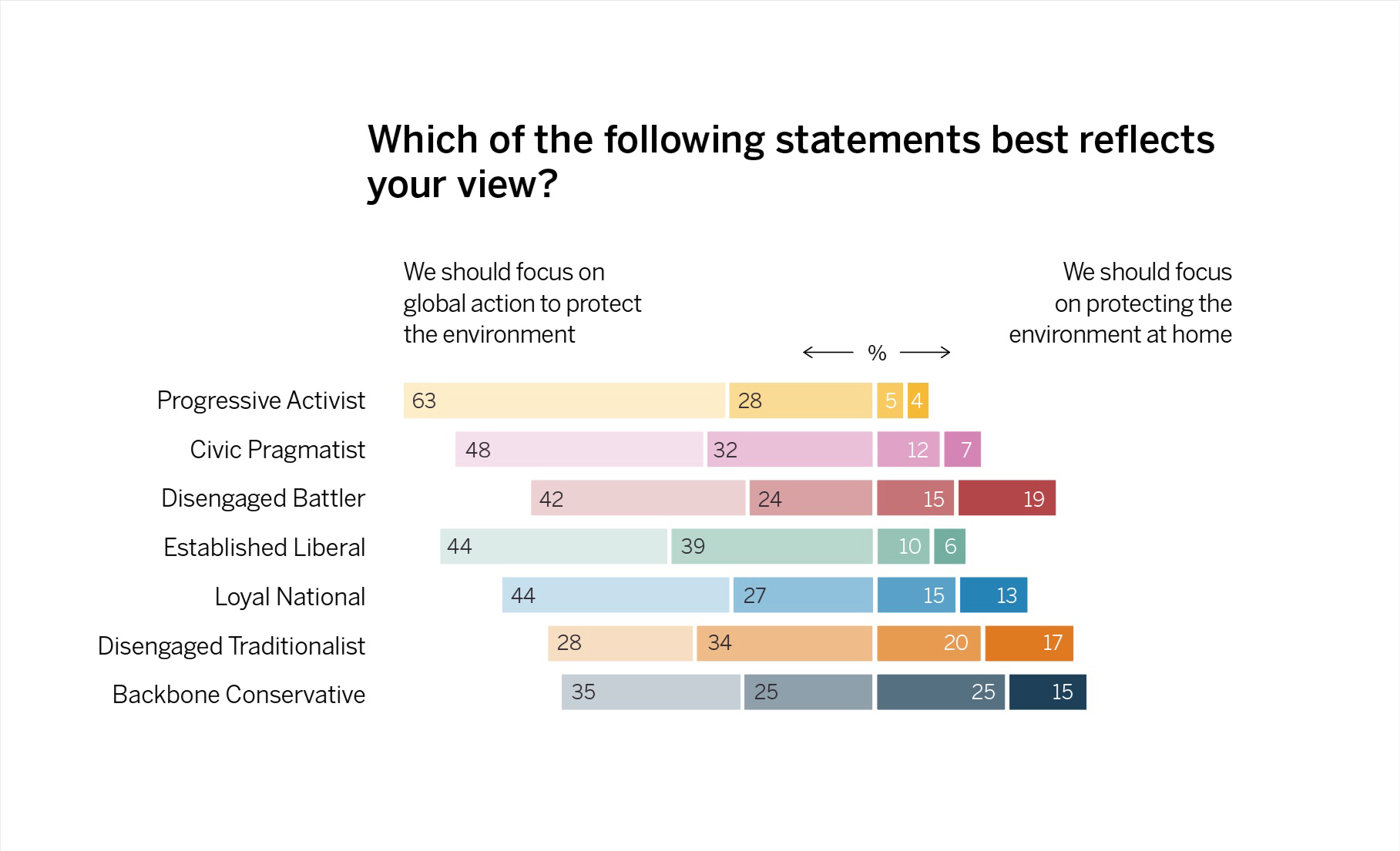 Across the segments, there is broad recognition that climate change concerns all of us, regardless of income, background or politics. This points to the fact that there is currently no evidence of a culture war on climate change. A crucial goal for climate advocates across the political spectrum is ensuring that this situation doesn’t change, with disagreement with this view from 26% of Disengaged Traditionalists and 19% of Disengaged Battlers warning us against complacency. 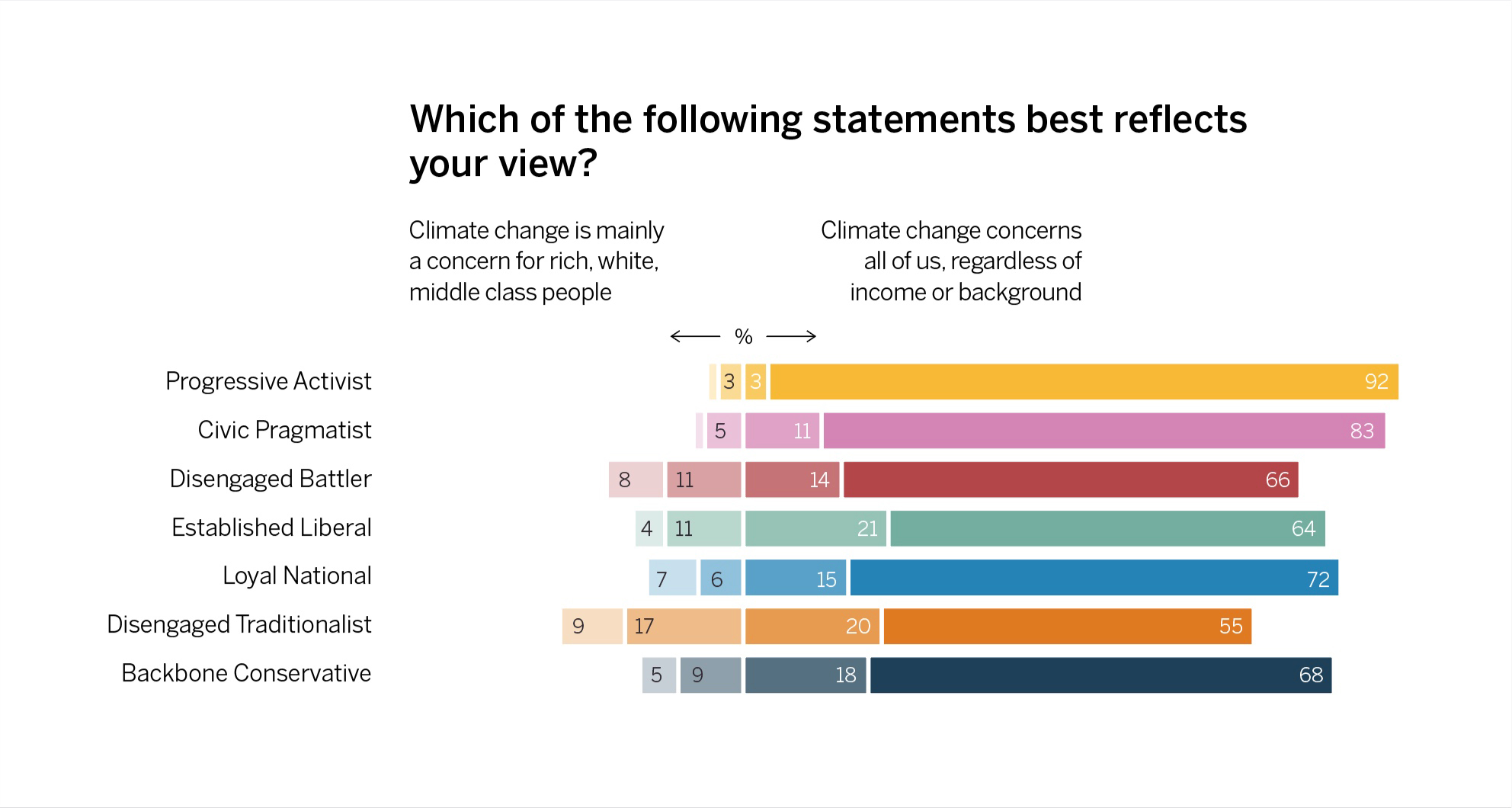 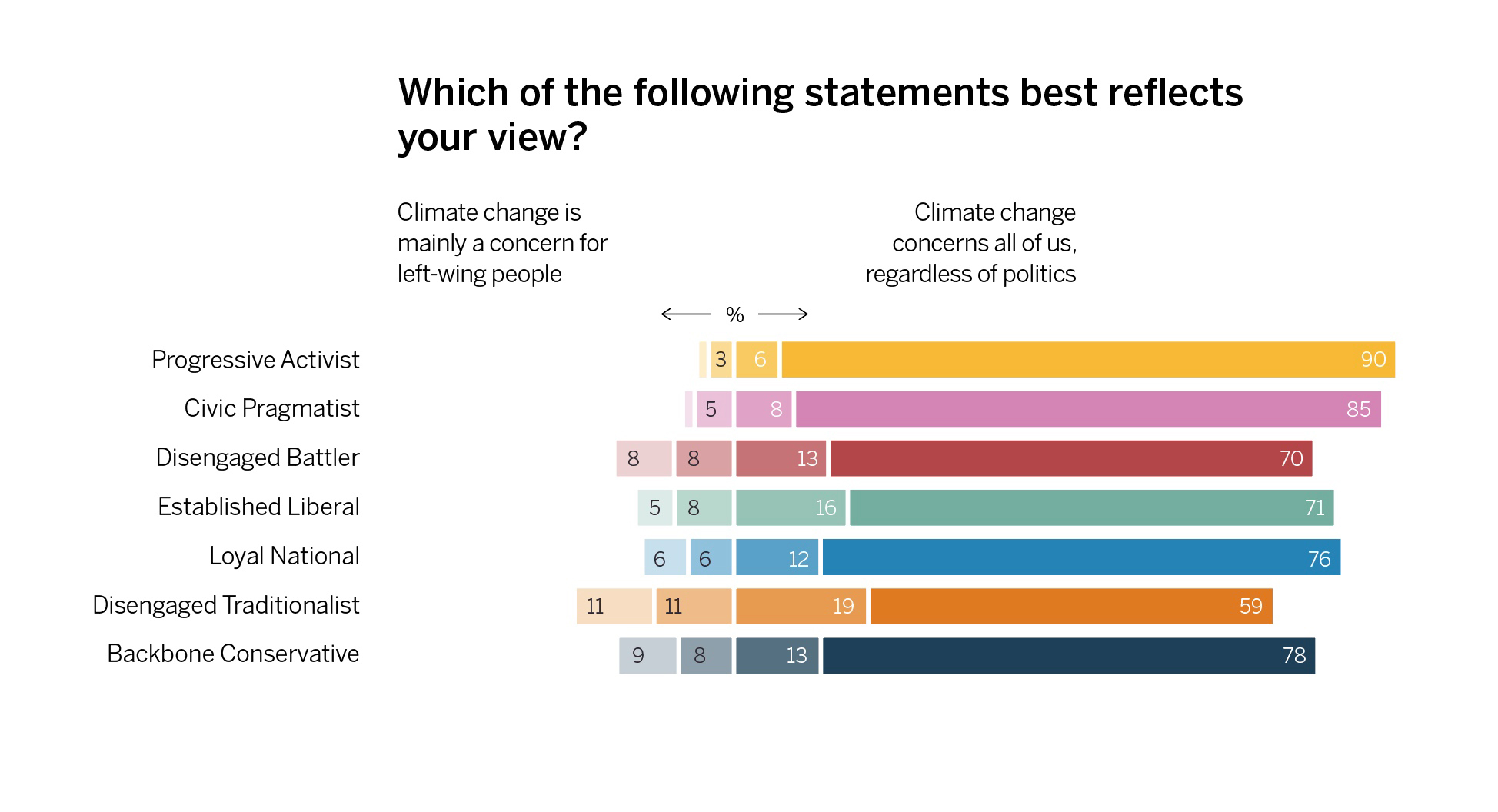 The percentage of people who believe climate change is an issue for left wing people, or for everyone

Although public discourse is increasingly raising issues of intersectional environmentalism (that climate change disproportionately affects marginalised groups, particularly Black, indigenous and other ethnic minority people) in the UK and around the world, there is very low understanding among the British public of the relationship between climate change and race. The majority of all segments except Progressive Activists say that the effects of climate change are the same for everyone, regardless of race.

The percentage of people who believe climate change disproportionately affects BAME communities, or for everyone equally

The most agreed-upon benefits of climate action are to protect future generations, create a healthier society and preserve the countryside. Values like fairness (applying stricter environmental rules to everyone), avoiding waste (ending our throwaway culture), unity (coming together in our efforts to protect the environment) and pride (in ‘doing your bit’) are visible across the segments. 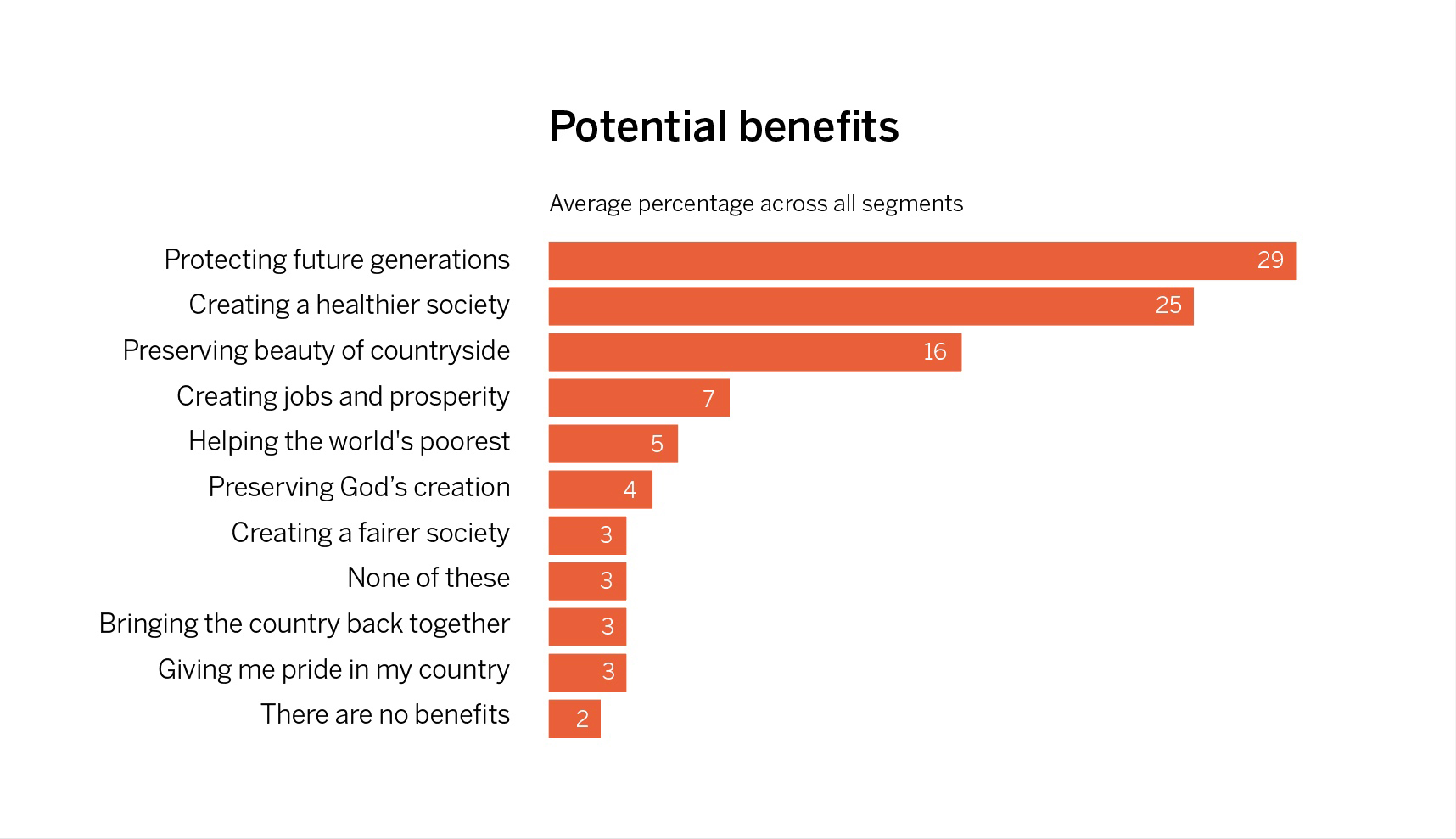 When it comes to active engagement, Progressive Activists are alone in saying they regularly talk about climate change. They are also the only segment where a majority agrees with both the aims and the tactics of environmental activists, and the only segment that consistently votes on the basis of a party’s climate change policies. 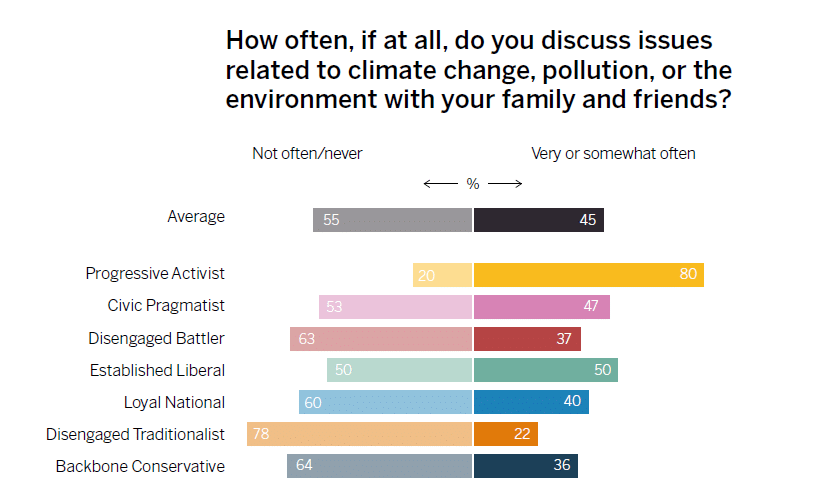 Certain policies – like preventing airport expansion, taxing meat and dairy products, banning the sale of new petrol and diesel cars by 2030, replacing gas boilers and changing UK farming practices – are divisive, with bigger differences, explored in more detail below, emerging between segments. Using the Britain Talks Climate toolkit, a culture war around these divisive but not yet toxic issues can be avoided.

Next:
Justice and inequality