The energy transition refers to the shift away from energy from fossil fuels and towards renewable forms of energy. This shift affects everyone, so it must be fair for all to ensure everyone can use energy in a way that fits their needs. But what is fair when it comes to the energy transition?

A Fair Energy Transition for All (FETA) is a project spearheaded by The King Baudouin Foundation (KBF) with a consortium of European foundations. FETA aims to inspire European Union (EU) policymakers to develop fair energy transition policies, giving them recommendations which take into account the diversity of needs across the EU.

Climate Outreach is partnering on this project, using our engagement expertise to create a methodology that encourages marginalised EU citizens to participate in the fair energy transition debate.

Climate Outreach’s narrative workshop methodology was adapted to encourage economically vulnerable people to participate in these debates, drawing on their own concerns, values and experiences in relation to fairness and energy. Over 900 citizens participated in the workshops in Belgium, Bulgaria, Denmark, France, Germany, Italy, Netherlands, Poland and Spain, between October 2020 and January 2022. Upcoming Fair Energy Forums, the next stage of the project, will be held from May to July 2022.

Many participants were already taking steps to save energy. This was not driven by concern for climate change so much as a need to save money. They had a desire for greater agency to participate in the energy transition, but this was undermined by their lack of capacity. For example, people in rented accommodation often had little control over when and how to improve energy efficiency through steps such as improving insulation. In the face of limited agency participants believed the responsibility should lie with those that do hold the power – governments and wealthier individuals.

Osman is a fictional persona encapsulating this view. He is a 28 year old male who lives in a city and has irregular employment. A fair energy transition to Osman is one that recognises he has little capacity to act and does not make demands of him. To him, the responsibility falls to the richest, most powerful social actors.

Trusting those in power

There was a deep distrust of politics and the ability of politicians to deliver a fair or successful energy transition. However, participants in Denmark, France, Germany and the Netherlands were more likely to suggest a need for a collaborative approach between governments, housing associations and citizens to allow for more inclusion in the decision-making.

Aida is a fictional persona capturing a 35 year old female healthcare assistant. She lives in social housing in the suburbs and is married with small children. A fair energy transition to Aida is one that has a state presence in delivery, which she feels will help the energy transition become more accessible.

We identified a tendency to discuss the energy transition in terms of the relationships between people, rather than in technical or economic terms. The concept of fairness was often linked to the need for the energy transition to minimise existing inequalities, and help build greater social cohesion. For example, public transport improvements were seen as desirable, with the positive vision of fewer cars on the road. But it was widely agreed that these improvements needed to be at a fair cost and accessible for all.

Nora, a fictional 40 year old rural housewife, illustrates this view. A fair energy transition to Nora is one that prioritises human relationships and would help to strengthen social cohesion. She thinks the energy transition should put people first.

There was a tension between the need for government support and leadership, and a need to preserve autonomy. The perception that fair energy transition policies represented a threat to personal freedom was most evident in Poland. Polish participants desired autonomy within the energy system. Individualistic values were favoured. For many, thoughts of being forced by the government to change behaviour led to backlash. To them, the transition needed to fit in with their lives and not threaten it.

Zofia cares full time for her disabled son and lives in a building with an old heat source. This fictional persona captures the need for a fair energy transition to be one that does not threaten the ability to meet the health needs of her family and does not limit personal freedom to use her own wood resources to heat the home.

A minority of participants lived in rural, isolated areas. Several enjoyed ‘the simple life’, but also did not want their current lifestyle to become any more isolated. Compared to urban participants, people in rural workshops saw any limits to freedom of travel by car as unfair. Some rural participants saw their car as a necessity in comparison to those living in cities who did not feel the need for a car.

Arlette is a widowed, retired female at 70 years old and represents a fictional persona living in a rural, isolated area. A fair energy transition to Arlette is one that isn’t overly reliant on unfamiliar and expensive technologies such as expensive electric vehicles. For her, simplicity is key.

Prioritising the next generation

Many participants acknowledged climate change and the need for the energy transition, often thinking about the future and their children. However, the financial barriers they faced to installing energy efficiency measures led to several alternate options being suggested for financing the transition. These included taxing wealthier individuals and big businesses, and the EU paying more.

Ayoub is a 37 year old who works and lives in an urban area. This fictional persona has one child whom he raises alone in rented social housing. A fair energy transition to Ayoub is one that would help him prioritise his children now and in the future during difficult economic situations.

Climate Outreach continues to champion the importance of involving a diverse group of communities when discussing policy and just transition. Project leads from our range of projects relating to the themes of fairness, just transition and the cost of net zero came together in a conversational webinar to talk through their findings and answer questions.

The FETA project has begun to uncover the diversity of values and needs among economically marginalised EU citizens in relation to the energy transition. FETA signposts to a need for an understanding of what fairness means for all individuals in society. We can reflect on this when thinking about our own energy needs. A recording of a webinar presenting the workshop results from March 2022 accompanies the published report.

The sole responsibility for the content lies with the author and the content may not necessarily reflect the positions of NEF or the Partner Foundations. 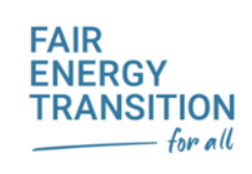 Our partners presented the initial findings from this project in the webinar below.

Emma joined Climate Outreach as a Researcher in December 2021. Helping to design social science research methods and collecting and analysing qualitative and quantitative data will be her focus. Emma is excited to combine research with public engagement as she loves learning from data and sharing climate change knowledge in a way that inspires action.

Emma completed an MSc International Environmental Studies degree at the Norwegian University of Life Sciences. Her thesis investigated the use of information as a policy instrument to encourage climate relevant behaviour. A BSc Physical Geography degree at Lancaster University and interning with the British Columbia Council for International Cooperation to research the SDGs are also part of her background. More recently, Emma worked on a climate change programme in local government.

Growing up exploring and volunteering in local woodlands sparked Emma’s interest in protecting our natural world. Learning from experts during her Master’s degree inspired a career in motivating climate action using sound research.

Outside of work, Emma enjoys playing national league basketball for the City of Birmingham Rockets and can often be found walking her dogs!